Croatia Bound (to be fun)

Posted on November 1, 2017 by alisongardiner1

Jacob’s ladder, in the famous dream, stretches from Earth to the heavens, and fittingly I met Jacob when we were about to fly to Croatia. Although only six months old, Jacob sportingly bleeped on going through the metal detector at Manchester airport. The guards frisked him, clearly believing him to be a micro-terrorist, their suspicions compounded by his limited grasp of English. On close questioning, he probably replied with both ends. Needing to apply for a passport many months before travel, Jacob’s image would have been an in-utero ultrasound, thus black-and-white, fuzzy, not showing his current cute, smiley self, thus compounding the problem. They were probably also concerned that he might have had more than 100 mls of fluid on or, more accurately, in his person.
If security guards are paid per person, they must have felt that Jacob was an easy option at the standard rate of two frisks per kilo. When I last saw Jacob, he was wearing a blue and white striped all-in-one suit, presumably preparing himself for penal servitude. However I doubt that Jacob would have been attempting to smuggle anything other than an extra pot of apple squish (iSquish) into Croatia, M’Lud. Ultimately his parents might have felt that, despite the advantages of durability and ease of cleaning, it was a poor purchasing decision to buy him a metal nappy.
Once in Croatia we plunged into our watersports/land sports/climbing holiday. The enthusiastic people running the place put on many activities including a quiz. Some questions were a tad obscure, including what the national animal of Croatia was. Luckily fate had sent me a hint as I was sitting next to Marten. We could have used that celestial prod in the Netherlands last year. ‘Good evening, may I join your quiz team? My name’s Black-Tailed Godwit.’
The activities crowd put on a series of skits, including one featuring the superhero Climbing Wall Girl. We missed the other teams’ potential heroes: waterfront team’s Laser with obvious superpowers; cycle team’s Cycles with Wolves or, considering health and safety, Brakes for Wolves; tennis team’s Ball Boy – questionable superpowers. The local massive wind, Bora, struck several times, whisking cycle bits, washing, wetsuits – and probably small children – into the air, Wizard of Oz-esque. On the last night, I slept through force 12 winds. That’s my superpower. 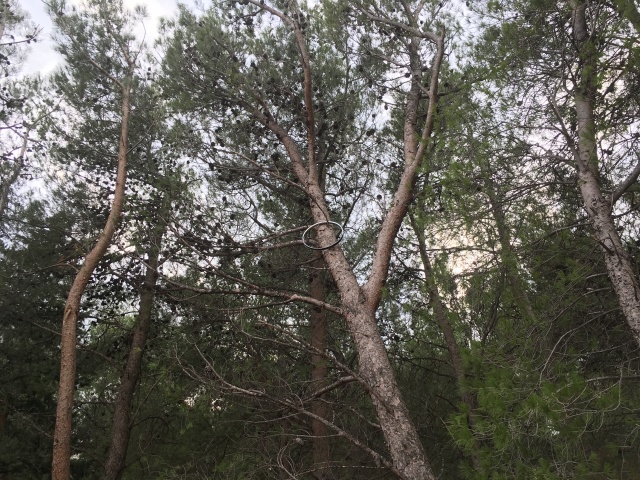 The tennis group was mixed, although Teenagers Thtiff and Thor (names changed to ensure anonymity, but you know who you are, Jack and Alex) were fantastically good, almost like machines (robots, not drinks dispensers, although that would have been useful). We watched the pros play a terrific exhibition match with all the required self-encouragement associated with adding competition to testosterone. I’ll take this lesson back to my everyday life, so shout ‘Come on, Ali’, grunt and fist pump before I inject a shoulder. Taking it a stage further, I might get my patients to applaud afterwards if they can still lift their arms.

Coming back, I was mortified to find that we had failed to pack a chainsaw in our hand luggage as below.

A simple error to make.
Would I go back? Absolutely. The area is beautiful, the people delightful and the holiday was huge fun. However, to improve my chances of getting through security without being stopped, I’ll travel with my chainsaw, but without Jacob and thus Jacob’s Bladder.

No small children were harmed in the writing of this blog.