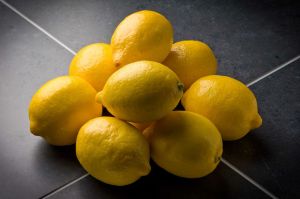 I had always believed that photography was a point and click job, presumably a hangover from my Kodak Instamatic days. That was until I watched my friend Ray transform from mild mannered genius into shutter fiend. It turns out that you have to take into account other seemingly unrelated stuff like where to buy lemons, wrinkle removal without botox (a real talent) and how to get onto the better side of masking tape. He uses about six kinds of lighting; I stick to one, the sun.
He recently put together a portfolio about lemons. I didn’t know you could do so much with fruit. Foolishly I had thought that miscellaneous citrus simply sat roundly on counters waiting to be photographed. Sooooo wrong.

Ray produced fantastic pictures of artistically arranged piles of lemons, sliced lemons, dropped lemons and lemons iconically arranged with gin and tonic bottles in soft focus behind them. One in a yellow eggcup acted as a parody on the Egg Marketing Board’s old slogan of ‘go to work on an egg.’ I thought the idea that one could just substitute lemon for egg was brilliant, being much more refreshing and rather zestier. “I’m sorry, Mrs Smith, but the reason you can’t get pregnant is because you have too few lemons.” “He’s really bright. A lemonhead.” Or if sounds like isallowed, “Don’t lemonxaggerate.”

He’s extremely picky about his work. As I admired a particularly great photograph, he pointed out that the pile of lemons had an overexposed rear (no, not mooning) and one at the front appeared to have cellulite. It’s good to know that Nature victimises other living beings giving them multi-dimples. Yet it’s astonishing that the average male practically has to have a degree in photography before he’d realise that fruit quality varied in supermarkets.
Nearby is a bay which is best photographed at daybreak. In order to capture this, he has to get up about three hours before dawn, drive to the closest parking area and then walk for an hour and a half lumping his bodyweight in kit to this beautiful moonlit bay. Several clicks later and the sun comes out and spoils it all. I cannot for even several seconds imagine rustling up the commitment to spend such quality time with an inanimate object, even a camera which is quite a fun one. I had always hoped that three hours before dawn didn’t actually exist and was just a chronographer’s conspiracy.
If a picture says 1000 words, he kindly reframed about 8000 words one evening. Magnificent citrus now adorns the walls around me at work, distracting me when I should be working not thinking of drinking. I’m so inspired by this that for my next blog I may produce only a photo, taking a leaf out of his book (or fruit bowl). So I’ll see you here in two weeks. Please bring your own tonic.

Writer of YA series of books. Broadcaster/podcaster Litopia After Dark.
View all posts by alisongardiner1 →
This entry was posted in Humour. Bookmark the permalink.