Posted on November 7, 2013 by alisongardiner1

Turkey: land of dreams, history, honey, pistachios and, as it turns out, wasps and volleyball. We have just spent a week there basking in warmth, also smugness that there were storms at home. My worry that the house might now have a tree-shaped hole in the roof lasted for several seconds until I decided that if our roof had blown off someone might have mentioned it somewhere, on Facebook perhaps, which is not so much a social medium, as a social enormous. Liking it might have been a pragmatic step too far. I’d need a dislike or a really very cross button for a negative roof situation. 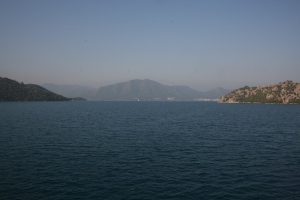 We were taken to our island by a boat which had been named to harmonise with the sea, history and its abilities. My vision of Neptune is that he sits at the bottom of the sea surrounded by mermaids, thus the Neptune Express did not fill me with terrific confidence. Luckily, the name turned out to be totally erroneous: Neptune-free, we slowly approached the island, wind in our faces, beer in hand, stretched on a sun lounger with the memory of the microscopic legroom of seat 21A fading fast. The hoi polloi had found our resort; Vladimir Putin was spotted a couple of times, though neither on a windsurfer nor waterskiing. He was walking around, presumably in transit to Roman Abramovich’s yacht which was moored less than a kilometre away from us. My son and his friend kayaked out to the yacht, returning with stories of how friendly the crew were, although failing to offer them either tea or muffins. 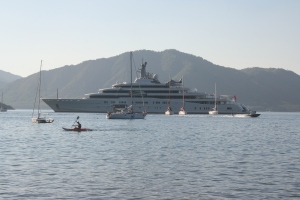 I indulged in a range of activities, especially lunch, but including aquarobics, which in the warm Mediterranean is completely lovely. Many of the ladies were rather well endowed in the bust department. Standing chest-deep, we created small tsunamis during the jumping exercises. We then tried water Zumba (presumably Wumba); fun although damper, as there was lots of arm flapping, soaking the until now dry upper third of your body and everyone else’s within 2 metres of your wingspan. After a shower to desalinate, I took to a sun lounger with a gossip magazine, reading about Kanye West’s son North. One has to sustain the all-encompassing hope that Kanye has no more than two further children, South West and East West, as West West would be ridiculous. Perhaps the fourth could be North by North West or South-East West. Or Go West? East meets West West? I’m sorry for anyone whose last name is Pole. Only two possibilities, although to have the surname of Bear could be fun, with Polar, Yogi and Born only scratching the surface. When we hit the market, it turned out that my bargaining skills had faded. At my first attempt to buy sunglasses, they lead with a bid of 11 Turkish lira (about £4). My ‘gosh, that’s reasonable’ part of the brain swept the ‘always haggle in a market’ section into a black hole. Paid 11 lira. Ashamed of my zero-rated bargaining power, I was tempted to lie to my husband about it. ‘They opened at 50, but I manoeuvred brilliantly…’ I improved on my next venture, by about 10%. However, with a few more carrier bags of experience, I began to pay about 50%. This doesn’t mean that I spent less; I still came home cleaned out and close to the excess baggage rate. Home now, washing machine in overdrive, brain in neutral, just calculated my body’s excess baggage: not good. Still, it could be worse; the roof’s intact and with my de-rusted negotiating skills, I might be able to do only 50 % of my work on Monday. Ok, 65%. Last offer.